Speech Text by Request (or Notes from International Women's Day) 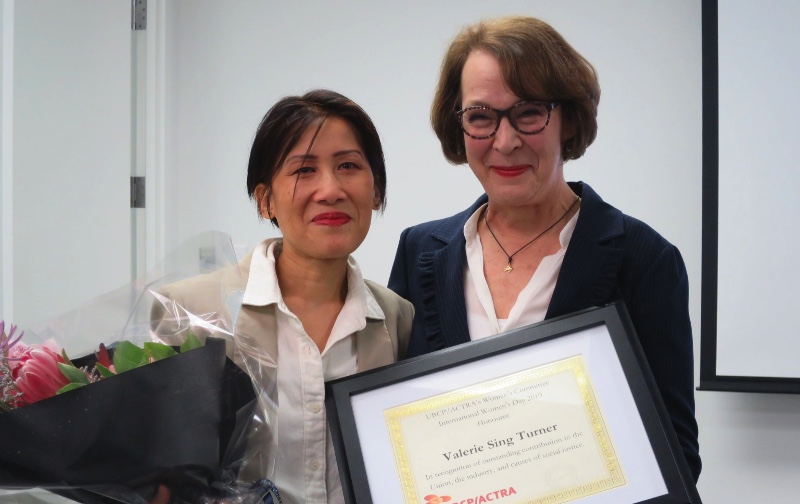 June 25, 2019 – I must confess that I really suck at self-promotion. It's been more than three months since I was honoured with the 2019 UBCP/ACTRA International Women's Day Award on March 8, 2019, at a lovely mid-morning reception at UBCP's offices. And it wasn't until a complete stranger PM'd me on Facebook about a month ago asking for a copy of my speech that it occurred to me that what I said at the Westcoast Women in Entertainment (WE) gala at The Imperial the following evening might be worth sharing long after the fact. So here's the version of my speech from the gala, and here's to Lena for prodding me to share it...

My thanks to the members of UBCP/ACTRA and the UBCP Women’s Committee for this tremendous honour.

But I have to say that when I got the call that I was to be honoured with this award, my reaction was frankly one of disbelief. In an industry that measures a woman’s success by the length of her credits on IMDB and the fatness of her bank account – perhaps the only time that “woman” and “fat” appearing in the same sentence evokes admiration – I didn’t think I fit the parameters of an ideal honoree.

In fact, I’ve been made to feel less than ideal for most of my career working in an industry that continues to prioritize the stories and perspectives of maleness and whiteness. In the early 90s in Toronto, when I got my first agent, someone looking like me didn’t get to audition for leading roles that insisted on women being “drop-dead gorgeous” – which was often code for white. Instead, I joined the same group of Asian women in the waiting room competing for nameless roles such as Nurse. Reporter #3. Immigrant. Refugee-Speaking-Broken-English. Victim.

Then I met my first mentor. Some of you may know Jean Yoon as the star of Kim’s Convenience, in her award-winning performance as Umma. Back in 1996, Jean cast me in the workshop of her multimedia play, The Yoko Ono Project, which she produced through her company, Loud Mouth Asian Babes. When we worked together to produce the premiere, Jean taught me how to be a Loud Mouth Asian Babe. I mean, you don’t challenge the status quo by being a “Quiet-and-Deferential-Asian-Wallflower” – particularly when Jean hands you the task of negotiating with Yoko Ono’s hard-nosed New York lawyer for the rights to use Yoko and John’s music and images.

It was Jean who made me understand that we’re not competing with other actors in the room, but with what’s inside the director’s male white head. (And yes, nearly 30 years later, they’re still mostly male, and mostly white.) That a win by a woman of colour in a significant role is a win for all of us, because one more role representing racialized women is one more disruption of the system. That we need to share with each other the opportunities that are out there, because the more women with skills and talent filling that waiting room, the less they’re able to deny that we exist. That by working together and holding each other up, we become undeniable.

So it’s no coincidence that it was a black woman, April Reign, who coined the #OscarsSoWhite hashtag. And it’s no coincidence that another black woman, Tarana Burke, started the #MeToo movement. Here in Vancouver, yet another black woman, Diane Roberts, mentored me in expanding my sense of community. Through Diane, I was given the opportunity to collaborate with Indigenous artists as part of her artistic directorship at Urban Ink Productions – a company with an intercultural mandate founded by the awesomely talented, Métis filmmaker and playwright, Marie Clements. Another mentor.

These are just a few of the countless courageous and undeniable women of colour who have fought for ALL women to have a voice, whose grit and sacrifices made it possible for me to accept this award, and who inspire me to do my part in tearing down the walls of systemic racism and the white patriarchy.

So…I’d like to suggest that perhaps success isn’t measured by how much money you make, but by how much good you do with it.

Perhaps success isn’t measured by the length of your IMDB credits, but by the depth of your respect for every single person you encounter, no matter what their gender.

And finally, perhaps success isn’t measured by a man’s subjective estimation of a woman’s appearance, but by the number of men intimidated by her insistence on speaking truth to power. I’ve been told that by that metric, I’m incredibly successful.

The reality is, International Women’s Day is only one day; the other 364 days still belong to men.

#Nevertheless We – all of us – must persist.